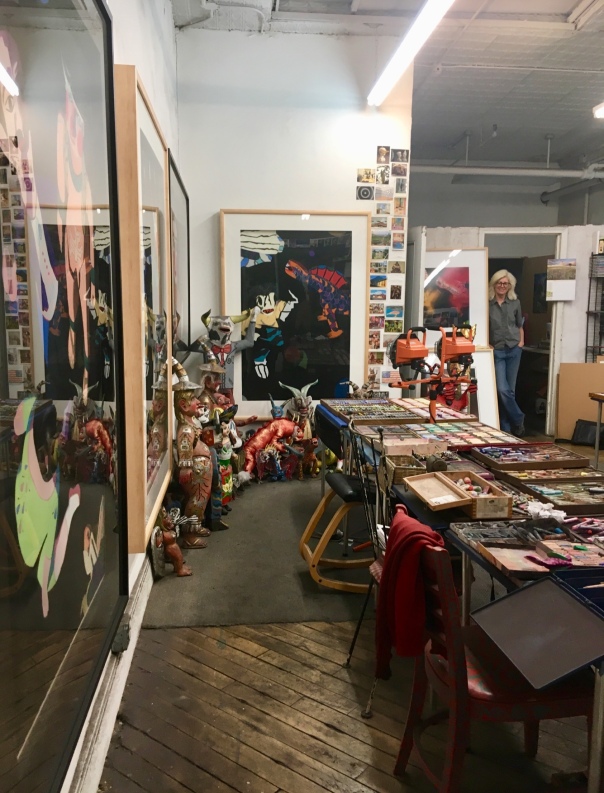 Finally, [John] Graham said, of all the arts, painting was the most difficult because one false move on a canvas could mean the difference between a great painting and a failure.  A writer could always resurrect a word, but a line or a shape was so ephemeral that, once changed, it was almost always lost for good.  “To create life one has to love.  To create a great work of art one has to love truth with the passion of a maniac.  If society does not perceive this love, perhaps humanity will.”  …The artists… came away… feeling as though they were not aberrations but part of a long tradition of individuals who had ignored fashion to create culture.

Comments Off on Pearls from artists* # 374

It can be based on but is independent of knowledge.

We can study art through nature,

but art is more than nature.

and has a life of its own.

Art in its nature is anti-historical

because creative work is looking forward.

It can be connected with tradition

but grows, consciously or unconsciously, out of an artist’s mentality.

Art is neither imitation nor repetition

but art is revelation.

Comments Off on Pearls from artists* # 290

All real art is or was modern in its time,

demonstrating a constant change in seeing and feeling.

If revival had been a perpetual virtue,

we would still live in caves and earth pits.

In art, tradition is to create,

Q: Would you share your artist’s statement for the “Bolivianos” series? 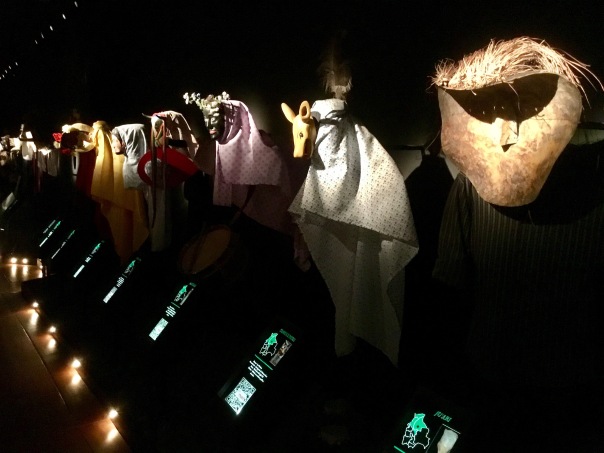 My long-standing fascination with traditional masks took a leap forward in the spring of 2017 when I visited the National Museum of Ethnography and Folklore in La Paz, Bolivia. One particular exhibition on view, with more than fifty festival masks, was completely spell-binding.

The masks were old and had been crafted in Oruro, a former tin-mining center about 140 miles south of La Paz on the cold Altiplano (elevation 12,000’). Depicting important figures from Bolivian folklore traditions, the masks were created for use in Carnival celebrations that happen each year in late February or early March.

Carnival in Oruro revolves around three great dances. The dance of “The Incas” records the conquest and death of Atahualpa, the Inca emperor when the Spanish arrived in 1532.  “The Morenada” dance was once assumed to represent black slaves who worked in the mines, but the truth is more complicated (and uncertain) since only mitayo Indians were permitted to do this work.  The dance of “The Diablada” depicts Saint Michael fighting against Lucifer and the seven deadly sins.  The latter were originally disguised in seven different masks derived from medieval Christian symbols and mostly devoid of pre-Columbian elements (except for totemic animals that became attached to Christianity after the Conquest).  Typically, in these dances the cock represents Pride, the dog Envy, the pig Greed, the female devil Lust, etc.

The exhibition in La Paz was stunning and dramatic. Each mask was meticulously installed against a dark black wall and strategically spotlighted so that it became alive.  The whole effect was uncanny.  The masks looked like 3D versions of my “Black Paintings,” a pastel paintings series I have been creating for ten years.  This experience was a gift… I could hardly believe my good fortune!

Knowing I was looking at the birth of a new painting series – I said as much to my companions as I remained behind while they explored other parts of the museum – I spent considerable time composing photographs.  Consequently, I have enough reference material to create new pastel paintings in the studio for several years. The series, entitled “Bolivianos,” is arguably my strongest and most striking work to date.

Comments Off on Q: Would you share your artist’s statement for the “Bolivianos” series?

There is an ancient view that beauty is the object of a sensory rather than an intellectual delight, and that the senses must always be involved in appreciating it.  Hence, when the philosophy of art became conscious of itself at the beginning of the eighteenth century, it called itself ‘aesthetics,’ after the Greek aesthesis, sensation.  When Kant wrote that the beautiful is that which pleases immediately, and without concepts, he was providing a rich philosophical embellishment to this tradition of thinking.  Aquinas too seems to have endorsed the idea, defining the beautiful in the first part of the Summa as that which is pleasing to sight (pulchra sunt quae visa placent).  However, he modifies this statement in the second part, writing that ‘the beautiful relates only to sight and hearing of all the senses, since these are the most cognitive (maxime cognoscitive) among them.’   And this suggests, not only that he did not confine the study of beauty to the sense of sight, but that he was less concerned with the sensory impact of the beautiful than with its intellectual significance – even if it is a significance that can be appreciated only through seeing or hearing.

Comments Off on Pearls from artists* # 211 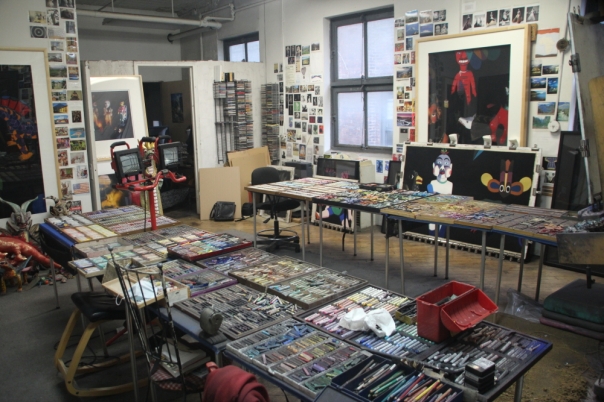 “Do you understand what this is?  Jacob Kahn asked me, his strong voice rising.  “Do you begin to understand what you are going to be doing to yourself?  You understand now what Picasso did, yes?  Even Picasso, the pagan, had to do this.  At times there is no other way.  Do you understand me, Asher Lev?  This is not a toy.  This is not a child scrawling on a wall.  This is a tradition; it is a religion, Asher Lev.  You are entering a religion called painting.  It has its fanatics and rebels.  And I will force you to master it.  Do you hear me?  No one will listen to what you have to say unless they are convinced you have mastered it.  Only one who has mastered a tradition has a right to attempt to add to it or rebel against it.  Do you understand me, Asher Lev?”

My Name is Asher Lev by Chaim Potok

Comments Off on Pearls from artists* # 191

If the goal of art is Beauty and if we assume that the goal is sometimes reached, even if always imperfectly, how do we judge art?  Basically, I think, by whether it reveals to us important Form that we ourselves have experienced but to which we have not paid adequate attention.  Successful art rediscovers Beauty for us.

One standard, then, for the evaluation of art is the degree to which it gives us a fresh intimation of Form.  For a picture to be beautiful it does not have to be shocking, but it must in some significant respect be unlike what has preceded it (this is why an artist cannot afford to be ignorant of the tradition within his medium).  If the dead end of the romantic vision is incoherence, the failure of classicism, which is the outlook I am defending, is the cliché, the ten thousandth camera-club imitation of a picture by Ansel Adams.

Robert Adams in Beauty in Photography

Comments Off on Pearls from artists* # 112

The beauty of art is better, “higher,” according to Hegel, than the beauty of nature because it is made by human beings and is the work of the spirit.  But the discerning of beauty in nature is also the result of traditions of consciousness, and of culture – in Hegel’s language, of spirit.

The responses to beauty in art and to beauty in nature are interdependent.  As Wilde pointed out, art does more than school us on how and what to appreciate in nature.  (He was thinking of poetry and painting.  Today the standards of beauty in nature are largely set by photography.)  What is beautiful reminds us of nature as such – of what lies beyond the human and the made – and thereby stimulates and deepens our sense of the sheer spread and fullness of reality, inanimate as well as pulsing, that surrounds us all.

A happy by-product of this insight, if insight it is:  beauty regains its solidity, its inevitability, as a judgment needed to make sense of a large portion of one’s energies, affinities, and admirations; and the usurping notions appear ludicrous.

Imagine saying, “That sunset is interesting.”

Comments Off on Pearls from artists* # 49

Q: What’s on the easel today?

A:  Today is a day off to let my fingers heal.  When I start a new painting, I need to rub my fingers against raw sandpaper in order to blend the pastel.  With each layer the tooth of the paper gets filled up and becomes smooth, but until then my fingers suffer.  Here is what I’ve been working on.

This pastel-on-sandpaper painting is an experiment, an attempt to push myself to work with bigger and bolder imagery.  The photograph clipped to the easel is one of my favorites.  It depicts a Judas that Bryan and I found in a dusty shop in Oaxaca.  Among the Mexican and Guatemalan folk art pieces that I’ve collected are five papier mâché Judases.  This particular one is unusual because it has a cat’s head attached at the forehead (the purple shape in the painting).  They are not made to last.  In some Mexican towns large Judases are hung from church steeples, loaded with fireworks, and burned in effigy.  This takes place at 10:00 a.m. on the Saturday morning before Easter.  Mexico is primarily a Catholic nation, of course, so effigy burning is done as symbolic revenge against Judas for his betrayal of Christ.  The Judas in the photo is small and meant for private burning by a family (rather than in public at a church) so by bringing it back to New York I rescued it from a fire-y death!  In sympathy with Mexican tradition, I began this painting last Saturday (the day before Easter) at 10 a.m.