… slow art arose in the later eighteenth century when two massive cultural changes converged, changes that have grown more acute ever since. First: acceleration, as capitalism and advances in technology quickened the pace of everyday life in unprecedented ways. It’s no coincidence that Harmut Rosa links the origin of modernity to the quickening movement of money, vehicles, and communication. The pressures of acceleration created the need for psychological breathers or timeouts. But second, and simultaneously: Western society grew more and more secularized. As a result, occasions to slow one’s tempo became harder to access – like devotional practices requiring viewers to focus intensely on single works over long periods of time. Hence an increased need met decreased opportunities to address that need. Slow art came to supplement older sacred practices by creating social spaces for getting off the train. In sum, as culture sped up and sacred aesthetic practices waned, slow art came to satisfy our need for downtime by producing works that require sustained attention in order to experience them.

Comments Off on Pearls from artists* # 473

Comments Off on Pearls from artists* # 418 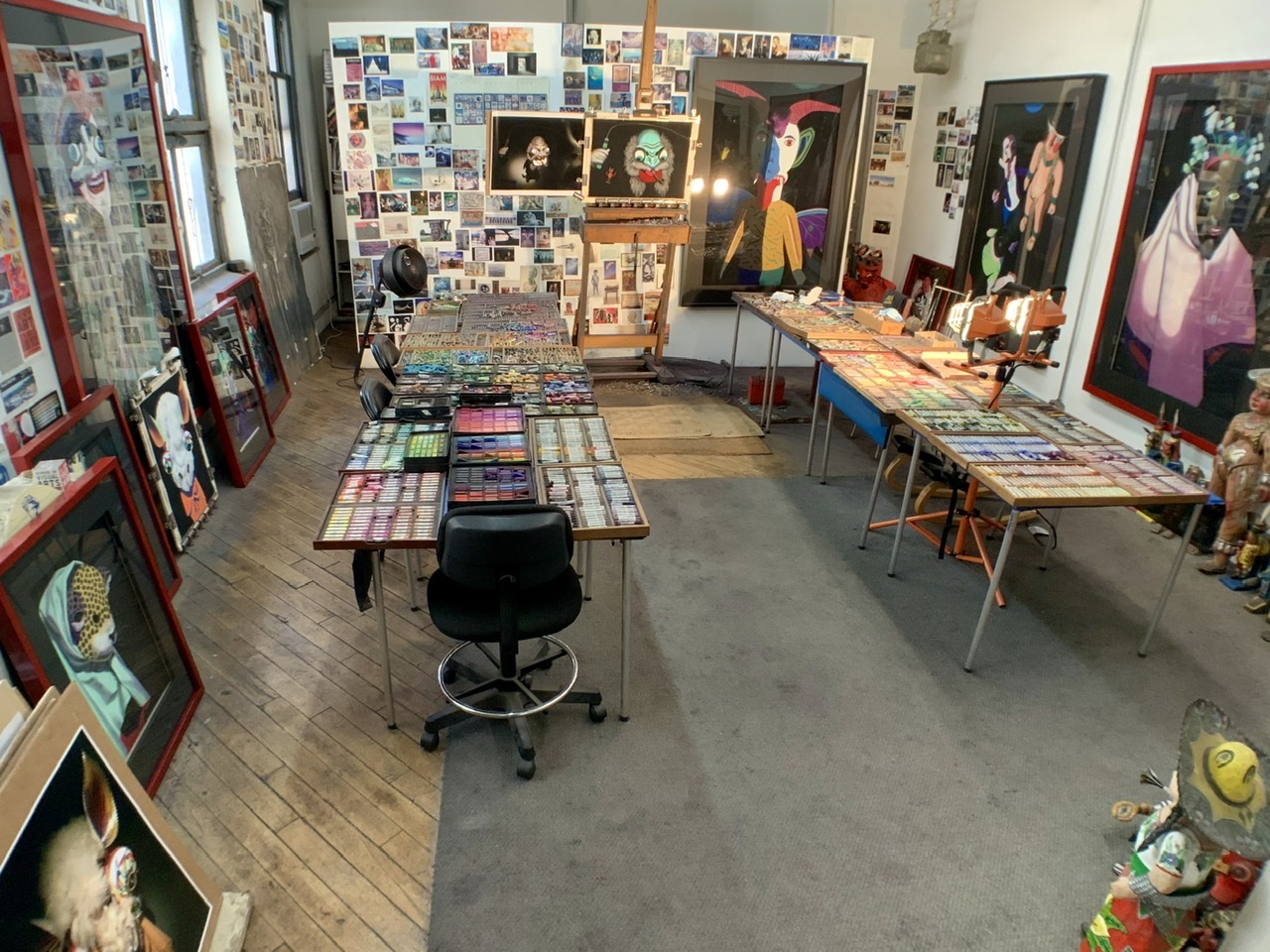 The obstacles faced by women who hoped to leave a mark on humankind have, through the millennium, varied in height but not in stubborn persistence.  And yet, a great many women have stubbornly ignored them. The desire to put words on a page or marks on a canvas was greater than the accrued social forces that told them they had no right to do so, that they were excluded by their gender from that priestly class called artist.  The reason, according to Western tradition, was as old as creation itself:  For many, God was the original artist and society had assigned its creator a gender – He.  The woman who dared to declare herself an artist in defiance of centuries of such unwavering belief required monstrous strength, to fight not for equal recognition and reward but for something at once more basic and vital:  her very life.  Her art was her life.  Without it, she was nothing.  Having no faith that society would broaden its views on artists by dethroning men and accommodating women, in 1928 [Virginia] Woolf offered her fellow writers and painters a formula for survival that allowed them to create, if not with acceptance, then at least unimpeded.  A woman artist, she said, needed but two possessions:  “money and a room of her own.”

The Eastern and Western classics are full of gods, saints, and heroes, all striving against life’s odds and overcoming them with perseverance, courage, energy  and hope as well as help from some sort of divine energy.  Unlike the gods, the saints, gurus, and heroes are humanized in creative works.  Otherwise, we would find it difficult to accept them, relate to them or look up to them for inspiration and courage.  It is the humanization of the subject that makes the supernatural sometimes feel real.   And sometimes makes the impossible seem reachable and achievable.  The classic writings all contain humanized heroes, saints and gods.  The characters in these books are so humanized that the courage and inspiration we get from their endurance in overcoming life’s challenges will keep on inspiring readers forever.  Because of this we can aspire to their accomplishments.  If we too are able to create meaningful works providing timeless inspiration to help others, our work will live on.

Comments Off on Pearls from artists* # 164

Q: Would you speak about your first trip to Mexico? 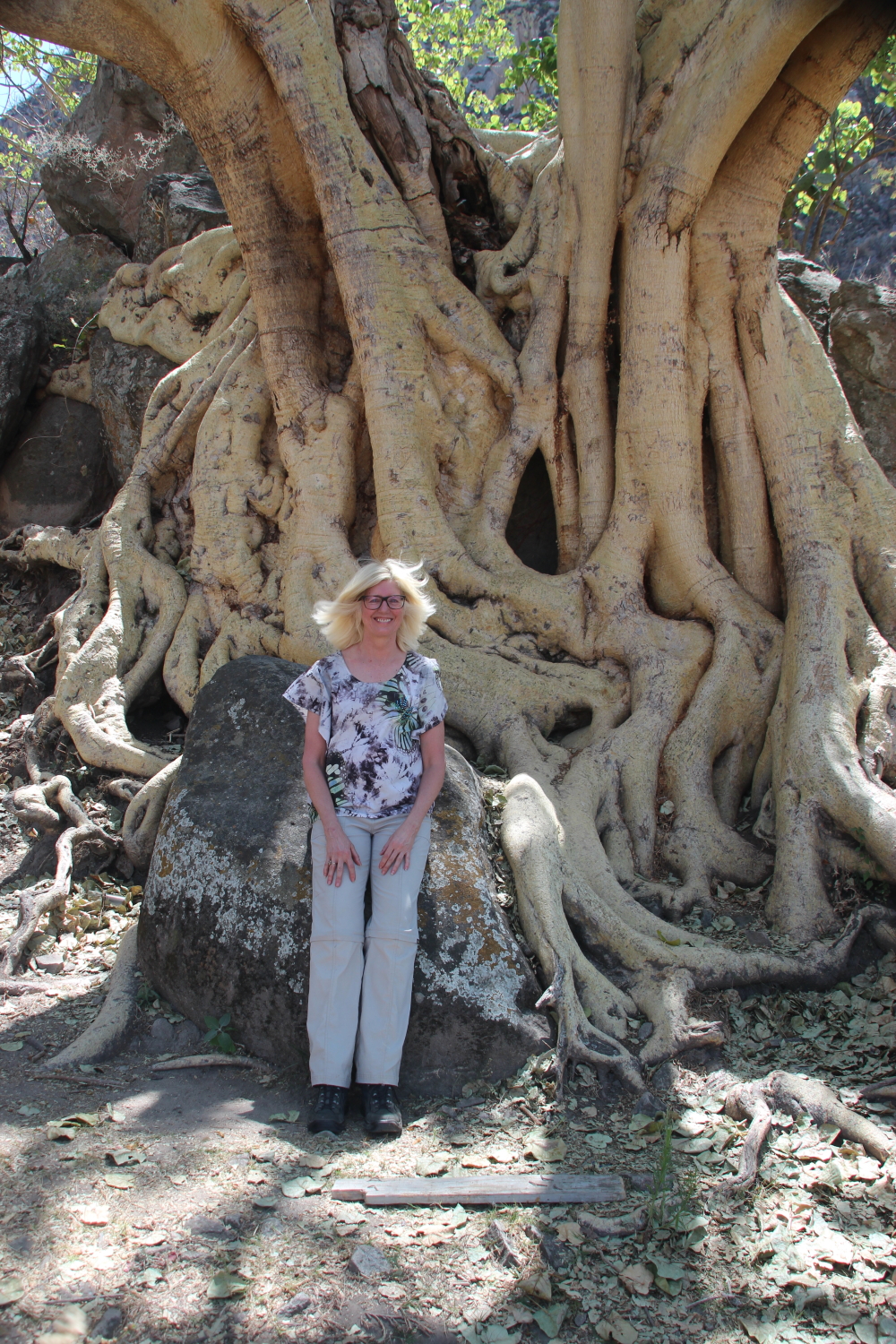 With an amate tree at Chalcatzingo

A:  In the early 90’s my late husband, Bryan, and I made our first trip to Oaxaca and to Mexico City.  At the time I had become fascinated with the Mexican “Day of the Dead” celebrations so our trip was timed to see them firsthand.  Along with busloads of other tourists, we visited several cemeteries in small Oaxacan towns.  The indigenous people tending their ancestor’s graves were so dignified and so gracious, even with so many mostly-American tourists tromping around on a sacred night, that I couldn’t help being taken with these beautiful people and their beliefs.  From Oaxaca we traveled to Mexico City, where again I was entranced, but this time by the rich and ancient history.  On that first trip to Mexico we visited the National Museum of Anthropology, where I was introduced to the fascinating story of ancient Mesoamerican civilizations  (it is still one of my favorite museums in the world); the ancient city of Teotihuacan, which the Aztecs discovered as an abandoned city and then occupied as their own; and the Templo Mayor, the historic center of the Aztec empire, infamous as a place of human sacrifice.  I was astounded!  Why had I never learned in school about Mexico, this highly developed cradle of Western civilization in our own hemisphere, when so much time had been devoted to the cultures of Egypt, Greece, and elsewhere? When I returned home to Virginia I began reading everything I could find about ancient Mexican civilizations, including the Olmec, Zapotec, Mixtec, Aztec, and Maya. This first trip to Mexico opened up a whole new world and was to profoundly influence my future work. I would return there many more times, most recently this past March to study Olmec art and culture.