Faced with the disparities between lived reality and America’s professed ideals of inclusion and equity, countless artists have begun embracing the social role of art and using aesthetic means to speak out against all manner of injustice.  In such a climate, the Mexican muralists [Jose Clemente Orozco, Diego Rivera, and David Alfaro Siqueiros] have once again emerged as models of how to marry aesthetic rigor and vitality to socially conscious subject matter that addresses the most fundamental questions concerning our collective pursuit of a more just and equitable society.  Not withstanding the rich cultural ties and decades of migration that have long existed between the United States and Mexico, the relationship between the two countries has always been fraught, marked as much by mutual wariness and bouts of hostility as by a spirit of camaraderie and cooperation  Yet the ugliness and xenophobia of the recent debates on the American side echoes the worst of the past.  It thus seems more imperative than ever to acknowledge the profound and enduring influence Mexican muralism has had on artmaking in the United States and to highlight the beauty and power that can emerge from the free and vibrant cultural exchange between the two countries.  As much as did American artists decades ago, artists in the United States today stand to benefit from an awareness of how dynamically and inventively the Mexican muralists used their art to project the ideals of compassion, justice, and solidarity.  They remain a source of powerful inspiration for their seamless synthesis of ethics, art, and action.

Comments Off on Pearls from artists* # 410

Elaine’s and Bill’s [de Kooning] relationship involved a continual exchange of ideas that wasn’t restricted to conversations with friends.  In the quiet of their studio when they were finally alone, they’d climb into bed and Elaine would read to Bill.  Faulkner was a favorite.  She also read Ambrose Bierce’s Civil War tales.  And she would read Kierkegaard.  That nineteenth-century father of Existentialism wrote with great passion about the essential solitude and uncertainty of the human struggle.  They were words of consolation for Bill and Elaine who, though confident in their paths as artists, could not have been free of the nagging fear that they might spend their lives looking and never find what they sought in their work.  Kierkegaard seemed to say that it didn’t matter, that it was striving that counted, and he described the need to reconcile oneself to the unknowable that was man’s fate.  The artist, he said, had a crucial role to play in that regard.  Like a religious figure who was an envoy from a realm most people could not access, the artist through his or her work revealed pure spirit so that men mired in the bitter reality of daily life might find the strength to continue.

Posted in An Artist's Life, Art in general, Inspiration, Pearls from Artists 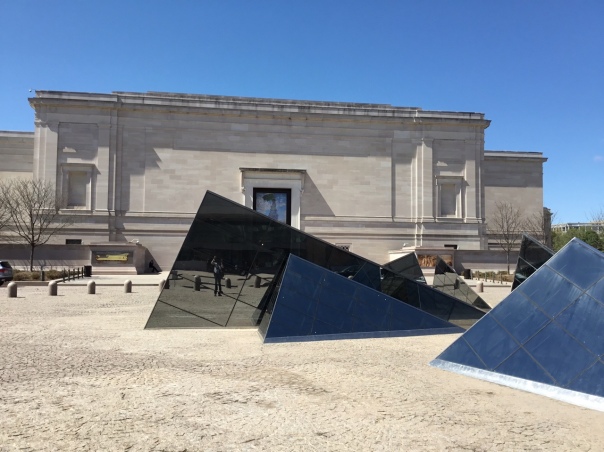 National Gallery of Art with self-portrait

Museums empower people when they are patrons for artists and thinkers; when they amplify civic discourse, accelerate cultural change and contribute to cultural intelligence among the great diversity of city dwellers, visitors, policy makers and leaders…  Museums present beautiful, accessible and meaningful spaces in which communities and individuals can meet, exchange ideas and solve problems.

David J. Skorton, Director of the Smithsonian Institution in “What Do We Value?” Museum, May/June 2016

Comments Off on Pearls from artists* # 205

Two facts differentiate Daybook from my work in visual art.

The first is the simple safety of numbers.  There are 6500 Daybooks in the world.  My contribution to them was entirely mental, emotional.  I never put my hand on a single copy of these objects until I picked up a printed book.  I made no physical effort; no blood, no bone marrow moved from me to them.  I do not mean that I made no effort.  On the contrary, the effort was excruciating because it was so without physical involvement, so entirely hard-wrought out of nothing physical at all; no matter how little of the material world goes into visual art, something of it always does, and that something keeps you company as you work.  There seems to me no essential difference in psychic cost between visual and literary effort,  The difference is in what emerges as result.  A work of visual art is painfully liable to accident; months of concentration and can be destroyed by a careless shove.  Not so 6500 objects.  This fact gives me a feeling of security like that of living in a large, flourishing, and prosperous family.

Ancillary to this aspect is the commonplaceness of a book.  People do not have to go much out of their way to get hold of it, and they can carry it around with them and mark it up, and even drop it in a tub while reading in a bath.  It is a relief to have my work an ordinary part of life, released from the sacrosanct precincts of galleries and museums.  A book is also cheap.  Its cost is roughly equivalent to its material value as an object, per se.  This seems to me more healthy than the price of art, which bears no relation to its quality and fluctuates in the marketplace in ways that leave it open to exploitation.  An artist who sells widely has only to mark a piece of paper for it to become worth an amount way out of proportion to its original cost.  This aspect of art has always bothered me, and is one reason why I like teaching;  an artist can exchange knowledge and experience for money in an economy as honest as that of a bricklayer.

Anne Truitt in Turn:  The Journal of an Artist

Comments Off on Pearls from artists* # 127

Q: You have spoken about learning to fly at the age of 25. What airplanes did you fly?

A:  I learned to fly at a small airport in Caldwell, NJ.  Flying is expensive and since I didn’t have much money, I sought a job at Liberty Aviation, the local flight school, in exchange for flying lessons.  For every three hours I worked, I earned a flying lesson.  At the time it cost $25/hour to rent a plane, plus $10/hour for an instructor, and I was fortunate to find an excellent flight instructor who offered to teach me for free.

After I completed ground school at Clifton High School, I took my first flying lesson.  It was on April 1, 1978 in a (two-seat) Cessna 150.  During the following months I flew every chance I could, in Cessna 150s and newer Cessna 152s, and also occasionally in Piper Cherokees.  On September 24, 1978 I received my private pilot’s license.

Next I trained for a commercial pilot’s license and a multi-engine rating.  I flew Cessna 172s and a twin-engine Piper Seminole and obtained my license and rating in May 1980.

In December 1980 I began Boeing 727 flight engineer training at Flight International in Atlanta, GA.  Most of this was in Boeing-727 flight simulators with Delta airline pilots as instructors.  My check-ride was in a Boeing-727 owned by FedEx.  I received my flight engineer’s certificate in February 1981.  At the time I was the only woman in the entire school!

Posted in An Artist's Life, Photography 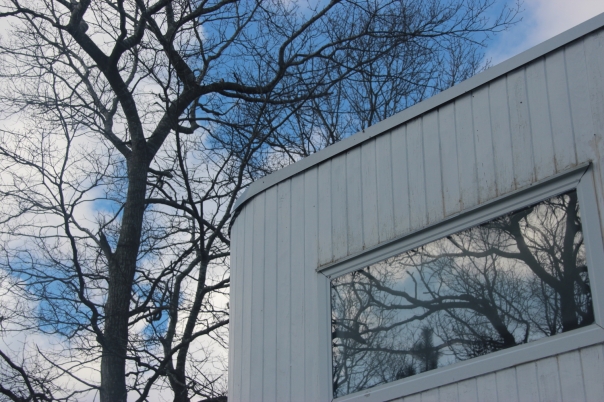 And, just as the analysis of a film by a psychoanalyst can tell us about some implications and some sources of a labour that is all the less tightly under our control since the material problems we encounter during it make us insensible to tiredness and leave our unconscious quite free, so the interpretation of one of our works by the mind of an outsider can show it to us from a new, and revealing perspective.

How disturbed we should be, were there some machine that would allow us to follow the thousand brains in a cinema!  No doubt, we should stop writing.  We should be wrong to do so, but it would be a hard lesson.  What Jules de Noailles said (recounted by Liszt) is true:  ‘You will see one day that it is hard to speak about anything to anyone.’  Yet it is equally true that each person takes in or rejects the sustenance that we offer, and that the people who absorb it, do so in their own way; and this it is that determines the progress of a work through the centuries, because if a work were to send back only a perfect echo, the result would be a kind of pleonasm, an inert exchange, a dead perfection.

Comments Off on Pearls from artists* # 30