Q: Do you have any ”dont’s” for artists that you swear by?

On my studio wall

A:  I don’t remember where I found this list, but most artists probably need to be reminded once in awhile.  I certainly do!

Comments Off on Q: Do you have any ”dont’s” for artists that you swear by?

Q: Do you have any essential words that you live by?

A:  I certainly do!  When I left the active duty Navy in 1989, my co-workers threw a farewell party.  One of the parting gifts I received was a small plaque from Tina Greene, a young enlisted woman whom I had supervised.  The words on the plaque deeply resonated with me, since I was about to make a significant, risky, and scary career change.  It was the perfect gift for someone facing the uncertainty of an art career.

Many years later Tina’s plaque is still a proud possession of mine.  It is hanging on the wall behind my easel, to be read every day as I work.  It says:

“Excellence can be attained if you…

Care more than others think is wise…

Risk more than others think is safe…

Dream more than others think is practical…

Expect more than others think is possible.”

Comments Off on Q: Do you have any essential words that you live by?

These paper cut-outs have their very pure existence, although they escape from your hands, from your scissors.  Their paper matter with the fine play of light on their flexibility, the physical aspect of this flexibility, all combine to make something miraculous which loses its essence when it is placed flat.  But it retains its essence when it is fastened to the wall with pins by Lydia.  The paper then keeps the life I am talking about and undergoes incessant changes.

Comments Off on Pearls from artists* # 114 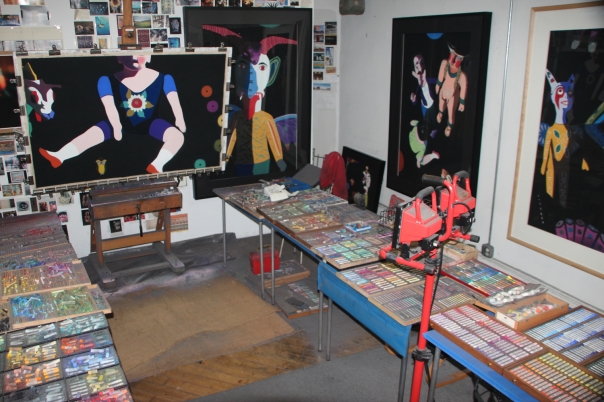 I think there are two very interesting stages in creative work.  One is confusion and one is boredom.  They generally both mean that there’s a big fish swimming under the water.  As Rilke said, “Live the questions.”  And not judge that there’s something wrong about confusion, because the people who are working, say, on the cure for leprosy – they work for years and years in a state of confusion, and very often they don’t find the cure.  They find something completely different.  But they keep living the question.  Confusion is absolutely essential to the creative process.  If there was no confusion, why do it?  I always feel that all of us have questions we’re asking all our lives, for our work, and if we ever found the answer, we’d stop working.  We wouldn’t need to work anymore.

Boredom – if you’ve ever been in therapy, you’d know that when you start getting bored, that’s really important.  The therapist sits up; there’s something going on, because the wall that you come against – that’s where the real gold is.   It’s really precious.

Andre Gregory (from My Dinner with Andre) in Anne Bogart, Conversations with Anne:  Twenty-four Interviews

Q: What is your earliest visual memory? 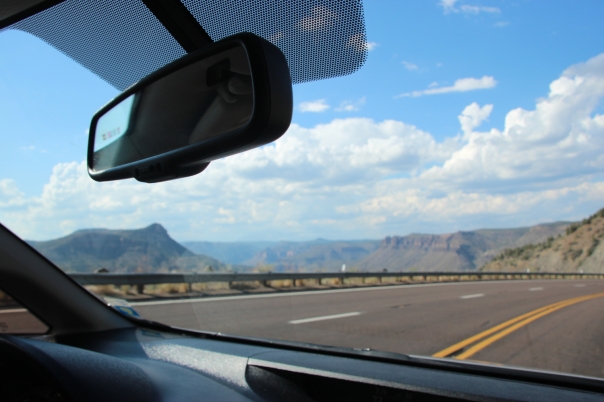 A:  I remember being in a crib at the house where I lived with my parents and sister, a two bedroom Cape Cod in Clifton, New Jersey.  I must have been about two or three years old.  The crib was next to a wall and I remember putting my right leg through the slats to push against it and rock my crib.  I spent hours looking at the space age wallpaper in the room, which depicted ringed planets and flying sci-fi space men.  My parents had recently bought the house and the bedroom’s previous occupant had been a boy.  This was in the 1950s and I dare say, the wallpaper was very much of its era!

Comments Off on Q: What is your earliest visual memory?

As soon as an artist has located the vital center of his activities, nothing will be more important than for him to remain within this center and never move further away from it (which is, of course, also the center of his nature, of his world) than the interior walls of his quietly and steadily expanding achievement.  His place is not, never, not even for a moment, next to the beholder and critic (at least no longer in an environment where all that is visible becomes ambiguous and preliminary, an auxiliary construction and temporary scaffolding for something else).  And one basically needs to be an acrobat to leap back safely and unharmed from this point of view into one’s inner center (the distances are too great and all the spots too destabilized to risk such an entirely inquisitive feat).  Most artists today use up their strength in this back-and-forth, and in addition to wasting their energy they get terribly confused and lose a part of their essential innocence to the sin of having taken their work from the outside by surprise, to have tasted it, to have joined others in enjoying it!

Comments Off on Pearls from artists* # 64

Q: You recently spent several weeks in Sri Lanka. After experiencing so many new sights and sounds, is it difficult to get back to work in your studio? 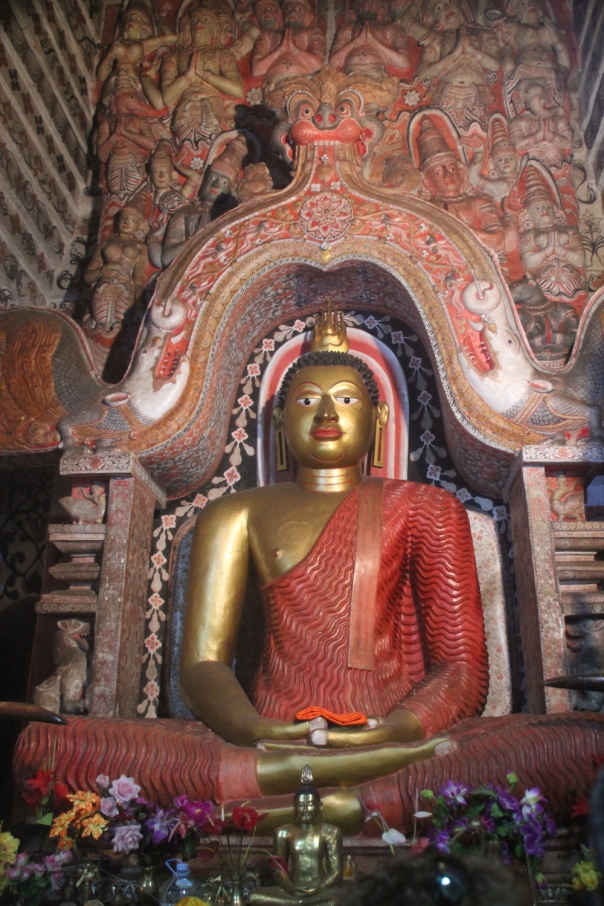 A:  It definitely requires some readjustment and a period –  maybe a day or two – during which I feel removed from the painting on my easel and need time to become reacquainted with it.  It’s a time to refocus, stay put, and reflect.  For weeks I’ve led an action-packed life, exploring a fascinating country on the other side of the world.  Over time, all of the experiences I’ve had will stay with me, or not, and in some ways begin to influence my work.

It’s funny.  I often think of my studio as a cave.  It’s a rather dark place and sometimes I have to force myself to go.  In Sri Lanka I saw many ancient Buddhist cave temples, wild and vibrant, with colorful paintings on the walls and ceilings, chock full of statues of Buddha and other deities.  My travels have given me a new appreciation of the riches to be found in caves of all sorts, including (especially) my own studio!

Q: Your pastel-on-sandpaper paintings are very labor intensive. Do you typically have just one in progress at any given time? 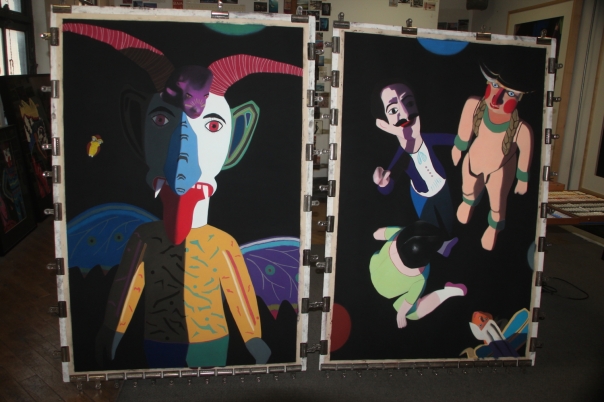 A:  For many years I always worked on one at a time because I have only one or two ideas – never more than that – about what I will make next.  Also, I believe that “all art is the result of one’s having gone through an experience to the end.”  (It’s on a note taped to the wall near my easel).  So I would work on one painting at a time until all of the problems in it were resolved.  Each piece that I undertake represents an investment of several months of my life and after nearly three decades as an artist, I know that once I start a piece I will not abandon it for any reason.  When it is the best painting that I can make – when adding or subtracting anything would be a diminishment – I pronounce it “finished.”  In the past I would start the next one only when the completed piece was out of my sight and at the frame shop.

But a few years ago I began working on two pastel paintings at a time.  When I get stuck – or just need a break from looking at the same image day after day (I am in my studio 5 days a week) – I switch to the other one.  This helps me work more efficiently.  The two paintings interact with each other; they play off of each other and one suggests solutions that help me to resolve problem areas in the other.  I’m not sure exactly how this happens – maybe putting a piece aside for awhile alerts my unconscious to begin working deeply on it – but having two in progress at the same time is my preferred way of working now.

A note about the painting on the left above, which was previously called, “Judas.”  I happen to be reading “Cloud Atlas,” by David Mitchell and came across the word “judasing” used as a verb meaning, “doing some evil to a person who profoundly trusted you.”  I’d never heard the word before, but it resonated with an event in my personal life.  So the new title of my painting is “Judasing.”  This is a good reminder that work and life are inextricably (and inexplicably) woven together and that titles can come from anywhere!

Comments Off on Q: Your pastel-on-sandpaper paintings are very labor intensive. Do you typically have just one in progress at any given time?

Q: How do you organize your studio?

A:  Of course, my studio is first and foremost set up as a work space.  The easel is at the back and on either side are two rows of four tables, containing thousands of soft pastels.

Enticing busy collectors, critics, and gallerists to visit is always difficult, but sometimes someone wants to make a studio visit on short notice so I am ready for that.  I have a selection of framed recent paintings and photographs hanging up and/or leaning against a wall.  For anyone interested in my evolution as an artist, I maintain a portfolio book with 8″ x 10″ photographs of all my pastel paintings, reviews, press clippings, etc.  The portfolio helps demonstrate how my work has changed during my nearly three decades as a visual artist.

Comments Off on Q: How do you organize your studio?

On the High Line

To collect photographs is to collect the world.  Movies and television programs light up walls, flicker, and go out; but with still photographs the image is also an object, lightweight, cheap to produce, easy to carry about, accumulate, store.

In Godard’s Les Carabiniers (1963), two sluggish lumpen-peasants are lured into joining the king’s army by the promise that they will be able to loot, rape, kill, or do whatever else they please to the enemy, and get rich.  But the suitcase of booty that Michel-Ange and Ulysse triumphantly bring home, years later, to their wives turns out to contain only picture postcards, hundreds of them, of monuments, department stores, mammals, wonders of nature, methods of transport, works of art, and other classified treasures from around the globe.

Godard’s gag vividly parodies the equivocal magic of the photographic image.  Photographs are perhaps the most mysterious of all the objects that make up, and thicken, the environment we recognize as modern.

Photographs really are experience captured, and the camera is the ideal arm of consciousness in its acquisitive mood.

Susan Sontag in On Photography

Posted in Art in general, Gods and Monsters, Inspiration, Pearls from Artists, Photography

Comments Off on Pearls from artists* # 34