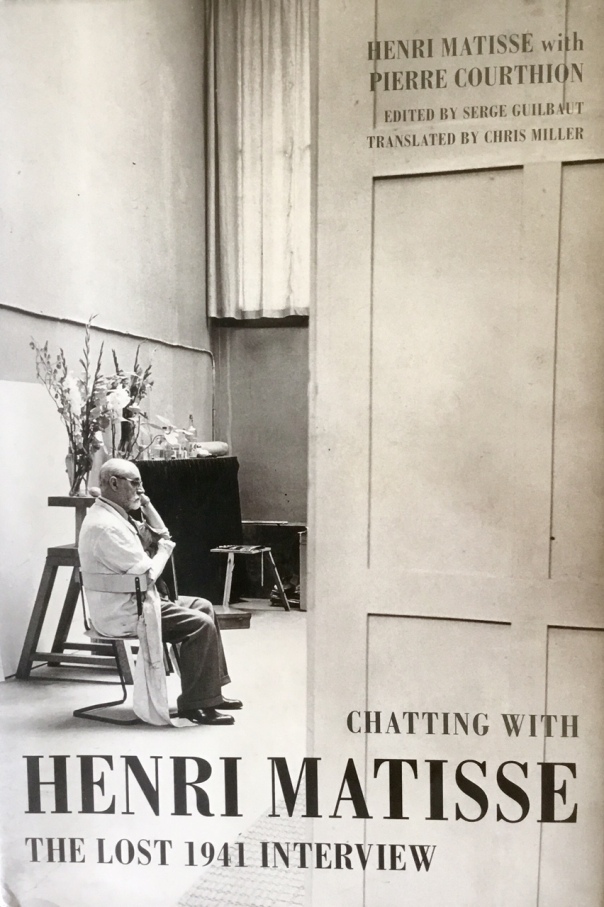 I am astonished by the accuracy with which Matisse remembers the most trifling facts; he describes  a room that he went into forty years ago and gives you the measurements, where every piece of furniture stood, how the light fell.  He is a man of astounding precision and has little time for anything that he has not confirmed for himself.   In art matters, he is not the sort to go looking for a profile fortuitously created by cracks in the wall.  Elie Faure writes that Matisse is perhaps the only one of his contemporaries (in particular Marquet and Bonnard) to know exactly where he comes from and the only one who never allows it to show “because his inveterate, invincible, vigilant willpower is always focused on being himself and nothing but.”

Matisse neglects nothing.  He seems to know as much about the art market as about painting.

So many stratagems to sell a painting, from intimidating the purchaser to seeming to avoid him:  Vollard used them all and used them successfully.  Not least the lies that he told to  reassure the client.  “It works like this,” says Matisse:  “To make a sale, you invent lies that have somehow disappeared into thin air by the time the deal is done.”

We talk of the difficulties faced by dealers hoping to gain access to Renoir in his Cagnes residence.  Renoir didn’t like having people talk to him about selling his work,” says Matisse:  “It bored him.  About the only one who got a foot in the door was Paul Guillaume; he dressed up as a young worker with a floppy necktie:  “You see, I’m a local.  I’ve always loved your painting.  I’ve just inherited a little money; I’d like to buy something.”

Comments Off on Pearls from artists* # 213