Q: How do you select a photograph to use as reference material to make a pastel painting? 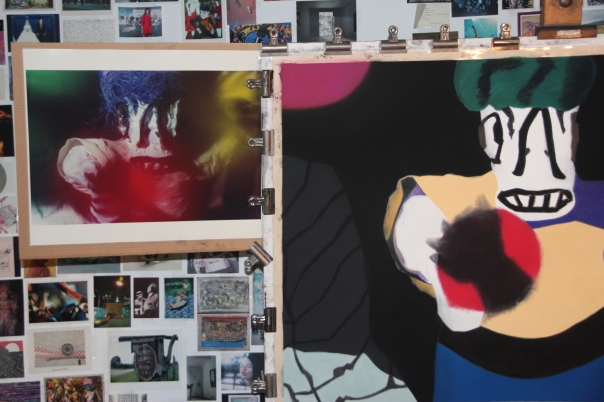 Photograph, left, and work in progress

A:  Like everything else associated with my studio practice, my use of photographs from which to work has changed considerably. Beginning in the early 1990s all of the paintings in my first series, “Domestic Threats,” started out as elaborately staged, well-lit scenes that either my husband, Bryan, or I photographed with Bryan’s Toyo Omega 4 x 5 view camera using a wide-angle lens.   Depending on where I was living at the time, I set up the scenes in one of three places:  our house in Alexandria, VA, a six-floor walkup apartment on West 13th Street in New York, or my current Bank Street condominium.  Then one of us shot two pieces of 4 x 5 film at different exposures and I’d usually select the more detailed one to be made into a 20″ x 24″ photo to use as a reference.

Just as the imagery in my paintings has simplified and emptied out over the years, my creative process has simplified, too.  I often wonder if this is a natural progression that happens as an artist gets older.  More recently I have been shooting photos independently of how exactly I will use them in my work.  Only later do I decide which ones to make into paintings; sometimes it’s YEARS later.  For example, the pastel painting that is on my easel now is based on a relatively old (2002) photograph that I have always liked, but only now felt ready to tackle in pastel.